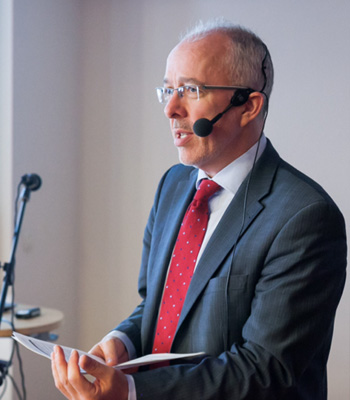 Here at DotScot we aim to reach as many Scots possible, including those across the globe. We therefore have a team of dedicated Global Ambassadors to help spread the word and promote Scotland’s online identity. Here we introduce Alasdair Reid.

I’ve been a policy advisor based in Belgium since graduating from Heriot-Watt University in the late 80s. My work focuses on innovation policy and how to support the emergence of new business models and clusters in national and regional economies. I’ve worked extensively with the European Commission as well as national and regional public authorities and public private partnerships throughout Europe.

The emergence of the digital economy is driving new opportunities for businesses and citizens. However, It also creates a lot of challenges if we are to ensure everyone has access to advanced digital services and information. As an example, I’m currently working with the major European e-research infrastructures (providing cloud computing, large volume data transmission and storage, etc) to develop a single gateway and catalogue of services that aims to make it easier for researchers but also small businesses and even “citizen scientists” to access and use the services available.

“I’ve seen how other smaller countries have been able to use digital means to ‘scale themselves’ internationally.”

I grew up in the north of Scotland in the town of Forres in the wonderful Laich of Moray between sandy coast and the Cairngorm mountains. I still have family there and get back as often as possible to enjoy running in the woods or enjoying sailing or kayaking out on the magical Findhorn Bay.

I’m impressed by how many new initiatives there are in the ‘far north’ ranging from impressive events like the Findhorn Bay Arts Festival to the brilliant North Coast 500 online tourism marketing platform. There is also a fabulous range of food and drink businesses (two of my favourites from Forres are Macleans Bakery and Speyside Craft Brewery) but also lots of advanced engineering companies that, thanks to improved broadband etc, can twin quality of life in the Highlands with business excellence.

I’d be really keen to see these events, platforms and companies using .scot rather than .com as  it would help them stand out from the crowd online.

“Scotland has enormous potential in the digital field and I would hope that  more organisations based in Scotland and beyond start using .scot to help create a common digital brand that projects Scottish know-how internationally.”

I signed up to be an ambassador for .scot to help promote the digital identity of Scotland online. I’ve seen how other smaller countries have been able to use digital means to ‘scale themselves’ internationally. A good example is Estonia. I’m an Estonian e-resident and hold an electronic identity card that allows me to access Estonian government e-services, set up a company, open a bank account, manage various formalities, etc. This scheme has helped Estonia (a third the size of Scotland in population terms) position itself as a provider of advanced digital services and attract business and investment.

Scotland has enormous potential in the digital field and I would hope that  more organisations based in Scotland and beyond start using .scot to help create a common digital brand that projects Scottish know-how internationally. I’m also a Global Scot (a network of international Scots appointed by the First Minister of Scotland and managed by Scottish Enterprise) and I always look at ways of promoting and linking Scotland when I’m meeting with colleagues in other countries.

The .scot concept is one that resonates with Scots based internationally and we should be looking to get all Global Scots signed up to using .scot for their websites, wherever possible.